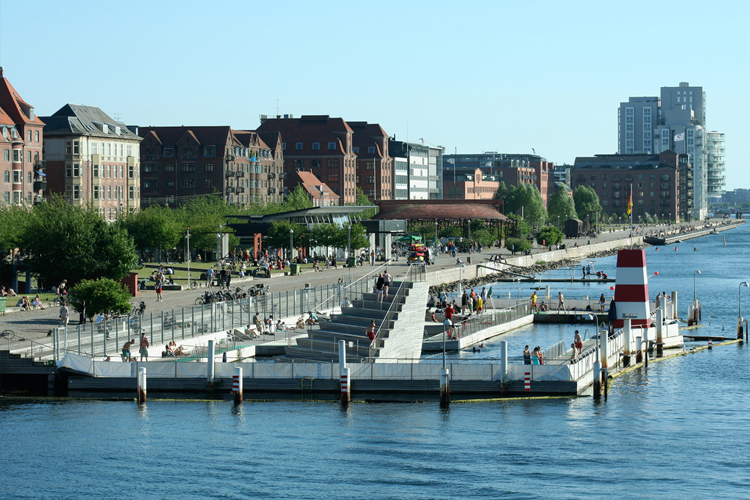 Abandoned factories, ports, warehouses and other unused industrial areas can once again become an important and attractive part of the city. Thanks to the joint efforts of architects, designers, sociologists, local authorities and community activists, post-industrial zones are being transformed into active areas with residential buildings, business space, public places, cultural and tourist attractions. The transformation of former industrial zones has been a popular trend in cities in Europe and around the world for 30 years.

Like the harbor between Rybalsky Island and Podol, Toolonlahti Bay of Helsinki is the city`s forgotten gem. The rapid development of Helsinki in the late 1800s began the transformation of the city center. During this time, the bay was surrounded by factories that polluted the water. The Danes with COBE dream of returning the abandoned territory to the townspeople and turning it into a central urban space. Their project is transforming the polluted bay, which now divides the city center in two, into a huge public park that unites the Finnish capital. There are plans to build hiking and cycling trails to reconnect the surrounding area to the bay and create a rich waterfront promenade.

Development plan for the Nordhavnen area in Copenhagen from the Danish architectural office COBE.

This is the largest development project to be implemented in the capital of the Scandinavian country in the coming years. The revitalization project of the post-industrial section of the port is designed for the next 40
-50 years. The territory with a total area of ​​up to 4,000,000 m2 will provide housing for 40,000 citizens and another 40,000 with jobs. Copenhagen city center is only 4 km from Nordhavnen, allowing easy access to the city`s main infrastructure. The authors of the project also take into account the convenient location of Nordhavnen on the coast of the Øresund Strait and plan to create a large number of recreational and public spaces near the water.

The transformation of HafenCity on the banks of the Elbe is carried out without the detailed plan of the territory that we are used to. Instead, there is only a master plan, which retains the planning structure of the old port, laid down the fundamental principles and flexible rules. HafenCity develops from west to east and from north to south; eight subareas will be fully completed within 25 years. Unlike the centers of most cities, which are predominantly occupied by shops and offices, HafenCity will combine various functions: it will create up to 7,000 apartments and 45,000 jobs. The project also provides opportunities for recreation, tourism, trade and cultural events.

New Elbbrücken district at HafenCity in Hamburg from the Dutch architecture and planning office KCAP.

The new quarter will acquire the features of the capital thanks to the urban lifestyle and the placement of service centers, shops and other infrastructure facilities on the ground floors of buildings. The district`s transport system was designed based on the principle of creating a pedestrian city, while at the same time taking care of the optimal use of public transport. The master plan structures public spaces and shapes the skyline with the contours of residential and office buildings. In this way, the Elbbrücken quarter project complements the basic quality principles of the entire HafenCity.

Converting the former harbor dock area into a high-density area for the Oostelijke Handelskade to live and work in Amsterdam from the Dutch architecture and planning office KCAP.

In the area known as De Pakhuysen (“Warehouses”), the huge warehouse buildings still resemble the days when the area was still functioning as a port. Some of the warehouses were closed and some were given new life after careful renovation. The new blocks, together with these historic buildings, form a differentiated complex of interconnected buildings that retain panoramic views of the River I. The complex`s mixed program includes offices, work / residential studios, luxury apartments and subsidized rental housing.

Transformation of the former port area of ​​Müllerpier into a residential area in Rotterdam by the Dutch architecture and planning office KCAP.

The Müllerpier Peninsula, surrounded by water on three sides, is located near the center of Rotterdam. Once there was a port quay, but now, according to the master plan, the territory is being reconstructed into a residential area with commercial and public functions. From a distance, Müllerpier resembles a port, but up close it looks more like a cozy urban labyrinth, contrasting with the surrounding wide expanse of water.

Welcome to RYBALSKY! Weedo coffee has opened in house No. 9